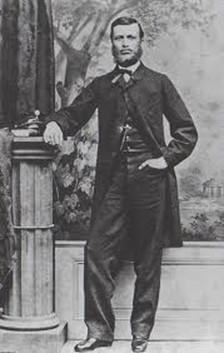 Constructor and inventor
He is the designer of soil drilling machines, blasting cartridges, underwater mines, tractoriograph, telemeter, polar pantograph, second-order line drawing instrument. Self-critical and responsible, he subjected his design solutions and inventions to the tests, criticisms and assessments of the
scientific and professional public. Those were in most cases presentations at the Academy of Natural Sciences of the Serbian Royal Academy.

Klerić and famous contemporaries
He had friendship, respect and productive creative cooperation with many famous contemporaries. What especially stands out is his cooperation with academicians Josif Pančić, Jovan Žujović, Sima Lozanić, Bogdan Gavrilović, Mihajlo Petrović Alas. The relations between Milutin Milanković and Ljubomir Klerić were not as we would expect them to be. Understanding the significance and greatness of Nikola Tesla’s scientific work, he proposed in 1894 to the Serbian Royal Academy to elect Nikola Tesla as a corresponding member.

On July 10, 2020, the Post of Serbia released a jubilee stamp with an FDC envelope on the occasion of the 175th anniversary of the birth of Ljubomir Klerić.